Like many Search Dog Foundation (SDF) canines, Pearl’s early years were troubled ones. Her first owner wasn’t home much, so Pearl frequently would jump the fence of their home and go looking for fun. Inevitably, she would be picked up by animal control and after paying the “bailout” fee one too many times, the owner saw the hopelessness of the situation and surrendered her to the local county shelter.

In early 2007, Pearl caught the eye of canine behaviorist Jack Cumbra. Jack frequently visited the Plumas County shelter on behalf of High Sierra Animal Rescue (HSAR) in Portola, CA to select dogs that would make good family pets for their organization. Jack had seen Pearl at the Plumas County shelter many times before, having passed her up because she was just too “hyper” to suit the needs of families that typically successfully adopt from HSAR.  She was “bouncing off the walls,” he said. But this time he saw opportunity in her happy, over-the-top attitude and thought she might have what it takes to become a Search Dog. 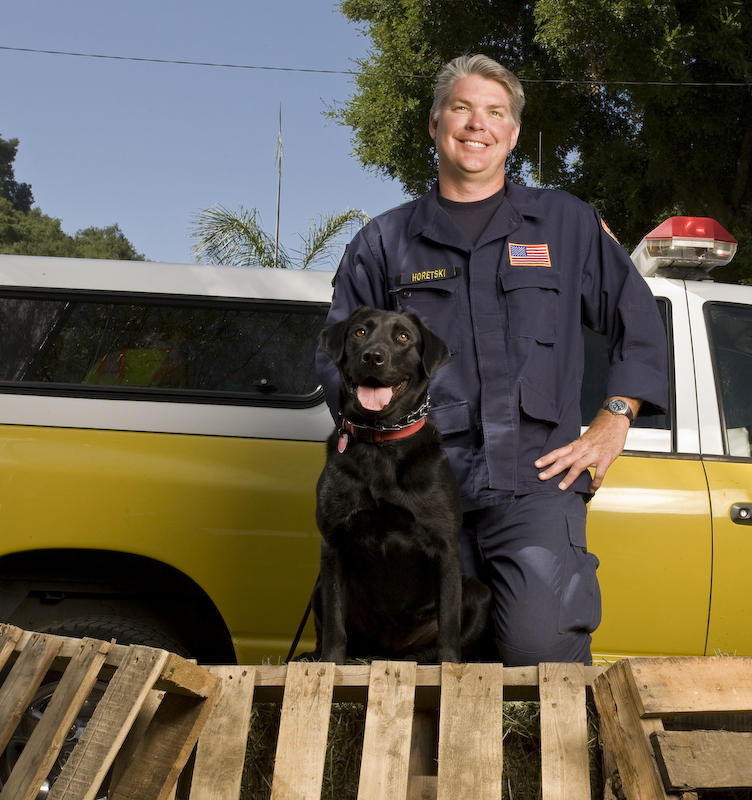 Not long after this, SDF received a call from volunteer canine recruiter Penny Woodruff. While scouting for potential Search Dogs, she had discovered a Lab she called “Black Pearl” for her beautiful glossy black coat. Penny evaluated this high-strung, toy-crazy dog, and found that she did indeed possess all the qualities needed in a Disaster Search Dog: intense drive and determination, boldness, athleticism, and the ability to focus on the task at hand. Penny brought Pearl to High Sierra Animal Rescue to be cared for until she was ready to enter SDF’s formal training program at Sundowners Kennel in Gilroy, CA.

“Within five minutes I knew we had a winner,” said SDF Lead Trainer Pluis Davern. “This dog just couldn’t sit still. All she could think about was finding and retrieving the toy. If the toy went into dense shrubs, Pearl would barrel in and find it.”

After completing her training in July of 2008, Pearl was partnered with Captain Ron Horetski of the Los Angeles County Fire Department. “Pearl searches like a bullet over any terrain,” said Ron, very happy to have been assigned to this beautiful, gifted canine.

After ten months of intensive daily training, Ron and Pearl attained FEMA Certification in May of 2009. They could now be deployed to a disaster locally, nationally, or internationally. Ron and Pearl didn’t have to wait long for their first deployment – a building collapse in La Puente, CA in July of 2009.

Just six months later, on January 14, 2010, they would be called to one of the biggest disasters to hit the Western Hemisphere in 200 years: a 7.0 magnitude earthquake on the island nation of Haiti. As part of California Task Force 2, Ron and Pearl were deployed to Port-au-Prince and searched for 16 days, combing the wreckage in search of victims still alive under acres of concrete and debris. Together with six other Canine Disaster Search Teams trained by the Search Dog Foundation, Ron and Pearl helped bring 12 people to safety. 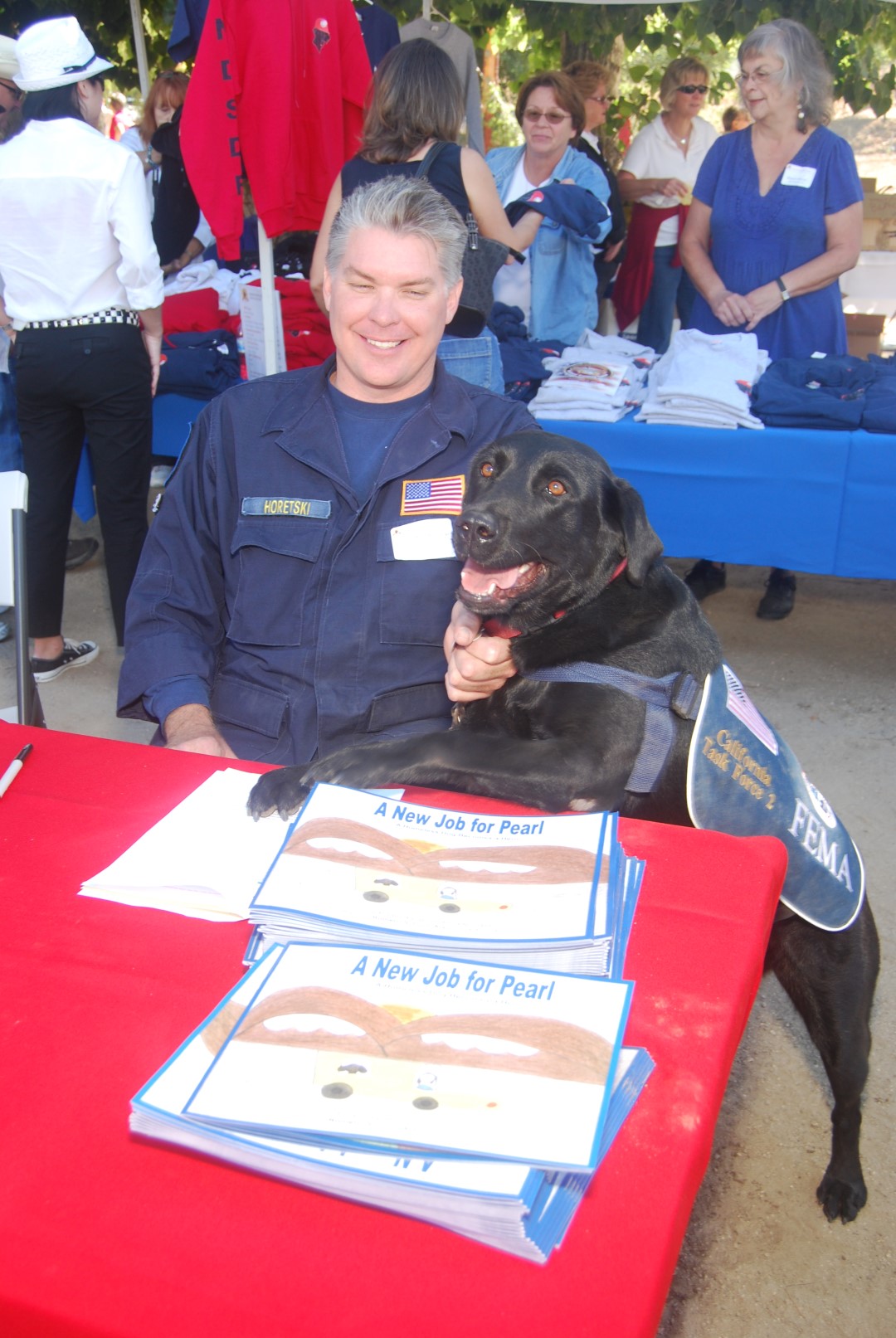 “A New Job for Pearl”

Allyn Lee and Connie Forslind, two second-grade teachers at Rancho Romero School in Alamo, CA, heard about the work of the Canine Search Teams in Haiti. They shared the story with their students, who were fascinated. They decided the story needed to be shared throughout the nation, so the teachers wrote a narrative which the children illustrated. The result is “A New Job for Pearl” – the true story of Pearl, Handler Captain Horetski, and their journey to Haiti. The goal of the class was to raise $10,000 through sales of the book – the amount needed to sponsor a Search Dog. So far this beautiful, touching children’s book has raised $7,200 toward the recruitment, training and care of a future Search Dog.

SDF Executive Director Debra Tosch: “Pearl is the first SDF-trained dog to win the ASPCA Dog of the Year award, and all of us are enormously proud of her accomplishment. The award validates the life-saving work that Pearl and Ron Horetski have done, and is an inspiration for all of our Canine-Firefighter Search Teams who work so hard to help prepare and train our Search Dogs.”

Captain Ron Horetski: “I am truly honored to accept this award on behalf of the Los Angeles County Task Force and I’m so proud of Pearl. I’m especially excited about the award because Pearl is the first Urban Search and Rescue (USAR) dog to be chosen, and hopefully this will raise awareness in the country about the role of canines in disaster response. (Pearl is the only female dog in the L.A. County Task Force, which makes it even more special!)

“Pearl is my companion, my family. She’s by my side 24/7 – at work and at home. She’s a real sweetheart, but when we get called to a disaster and it’s ‘show time,’ she gets down to business, and always performs at 100%. Being in Haiti with her and having the chance to work together to bring people to safety was amazing.

“The Search Dog Foundation found Pearl, trained her, matched her with me, and has provided non-stop support throughout Certification, deployments and our ongoing training. If it wasn’t for the Search Dog Foundation, I wouldn’t have Pearl, and we wouldn’t have been in Haiti to help with the rescue effort. The Foundation is training four more dogs for L.A. County this year, which will make a total of 12 Canine Disaster Search Teams – the goal of every Task Force. Pearl has been good to me, and I am good to her. Now we’re going to New York City to accept this award. It doesn’t get any better!” 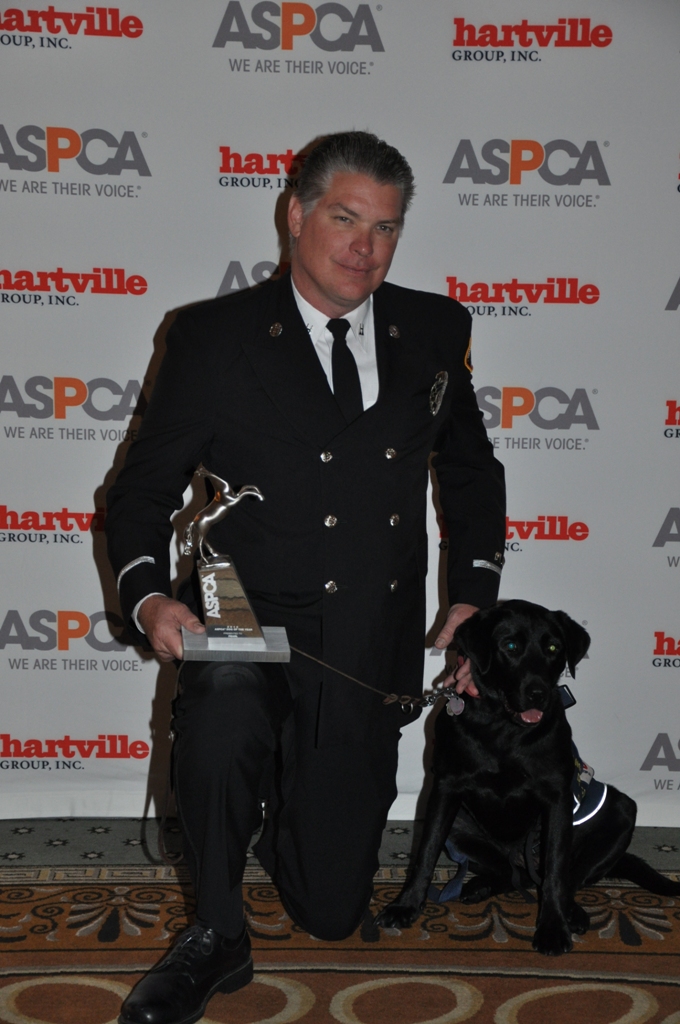 On March 11, 2011, Ron and Pearl were one of six SDF-trained Canine Disaster Search Teams deployed to Japan with California Task Force 2. The 72-member Task Force out of Los Angeles was mobilized by USAID and sent into the disaster zone along with Virginia Task Force 1 to comb the wreckage in search of live victims.

In accordance with FEMA standards, Ron and Pearl achieved Re-Certification in January of 2013 in Phoenix, AZ. Re-certifying every three years ensures that canine teams retain their deployment-ready status should disaster strike and will continue to be ready at a moment’s notice!

In August of 2013 Ron and Pearl deployed to a building collapse in East Los Angeles. Thankfully search dogs from the Los Angeles County Task Force were able to verify that no one was inside the home when it crumbled.

After retiring, Pearl enjoyed a quiet life at home with Ron and the rest of his pack. At 15 years old, Ron knew it was time to say goodbye and was at his faithful partner’s side as Pearl crossed the Rainbow Bridge.

With her lovable personality that switched to a serious, no-nonsense attitude when working, Pearl was the perfect blend of companion and working dog. We were all so lucky to have been part of her life for the time we were privileged to know her.