Originally named “Squirt,” this happy Yellow Lab was recruited from Sioux City Animal Adoption & Rescue Center in Sioux City, IA in February of 2013. His boundless energy and toy-obsessive personality were identified by Kellee Matthews of the South Dakota Canine Center, who routinely visits shelters and rescues in that area, seeking dogs that could have rewarding careers as working dogs. Kellee observed Squirt and reported to SDF that, “this boy is all go, go, go all the time.”  She went through a full evaluation with him and he passed every test with ease. 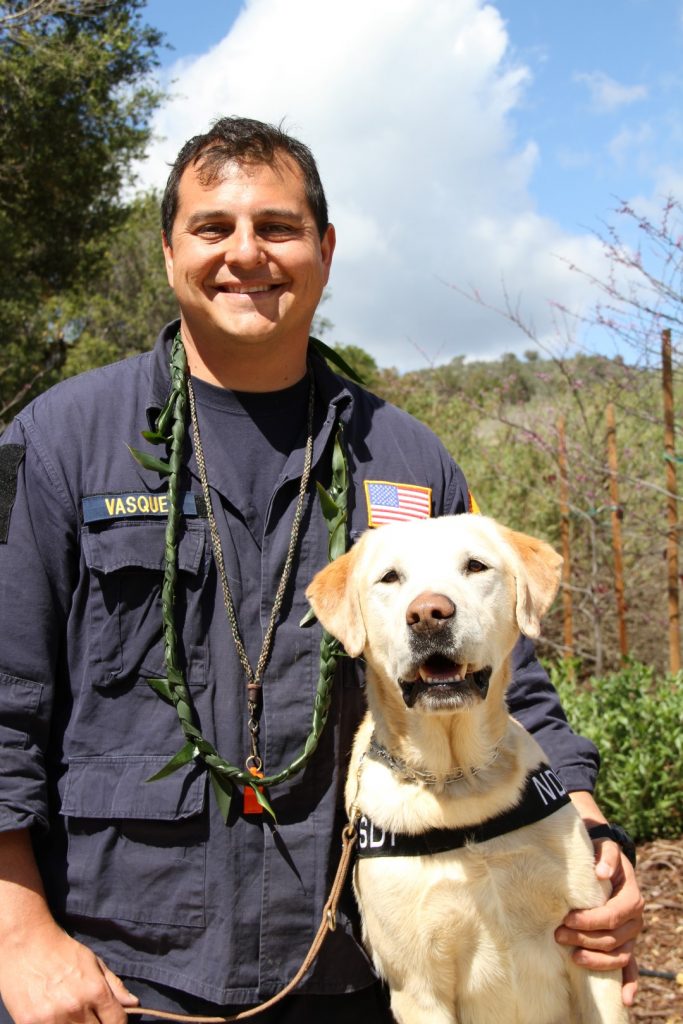 Kellee’s one concern out the gate was his age guesstimate – we are usually very objective about this and struggled a bit, wondering if our judgment was clouded by his strong presence and drive.  The lightened coloring of Squirt’s face made him appear to be older than we found he actually was. He had an “old man” look to him but a visit to a local vet confirmed that Squirt was a young dog within our recruiting age range. After a full medical evaluation, Kellee then sent him out to California for a chance to use his talents in the world of Search and Rescue.

Upon arrival, the foundation re-named him “Ripley” in honor of Steve Dowty of Kruger Bensen Ziemer Architects, Inc. Steve and his firm are helping to bring SDF’s National Training Center to life in Santa Paula, CA.

Ripley was amazing – strong in his drive and always ready to play the “search game.”  He was so bold and fearless on rubble that trainers had to focus on slowing him down and teaching him how to think things through on a pile. He was manic about toys and would not let anything get between him and his reward!

After several months of formal training, Ripley was paired with Los Angeles County firefighter and veteran SDF handler Jason Vasquez on April 1, 2014. Jason’s family was able to attend Ripley’s graduation and watched as Ripley and Jason were officially partnered in a small ceremony at the National Training Center.

Ripley lived with the Vasquez family and traveled to the fire station with Jason so that they could build the bond important in their partnership, as well as train together daily. In addition, the team trained with their California Task Force 2 teammates twice a week in preparation for their FEMA Certification Evaluation, which they achieved in College Station, TX on October 19, 2014. As members of California Task Force 2, Jason and Ripley’s Certification allowed them to deploy when disasters occur worldwide. 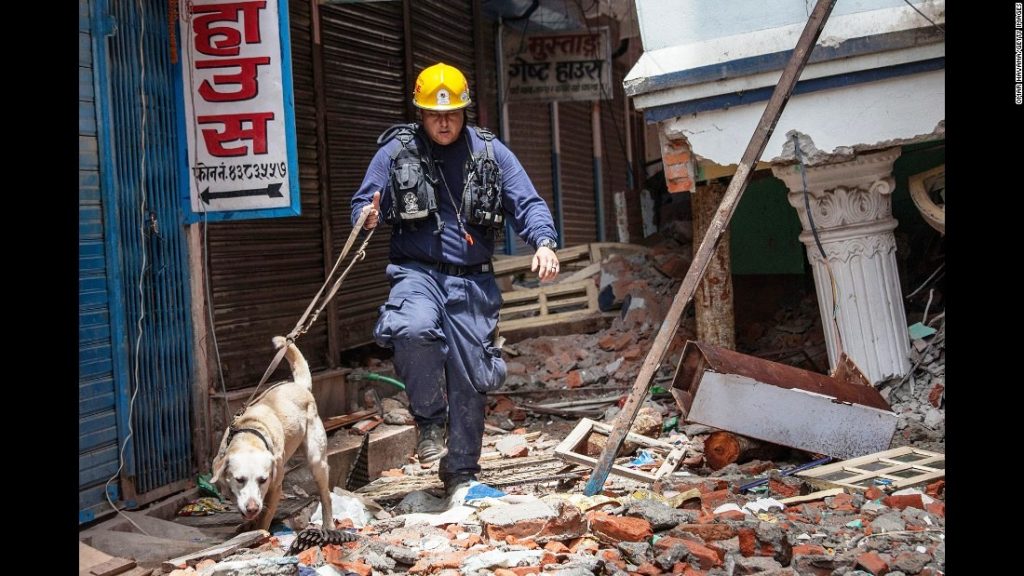 The team went on their first deployment with the Task Force to Kathmandu following the devastating magnitude 7.8 earthquake that struck Nepal on April
25, 2015. They searched the pulverized city for days, and the Task Force did help to bring someone trapped alive in the debris to safety. On May 12th, while packing up to return home, a magnitude 7.3 aftershock shook the area again and the entire Task Force reengaged in the search in case survivors had been buried in rubble from this quake. After 22 days overseas, the teams were flown home and reunited with their families on May 17, 2015.

Then on January 22, 2017, Jason and Ripley were placed on standby to deploy with their task force due to heavy storms that pounded the Los Angeles area. The heavy rainfall threatened flooding and mudslides, and the Los Angeles County Fire Department was prepared should they be called upon. 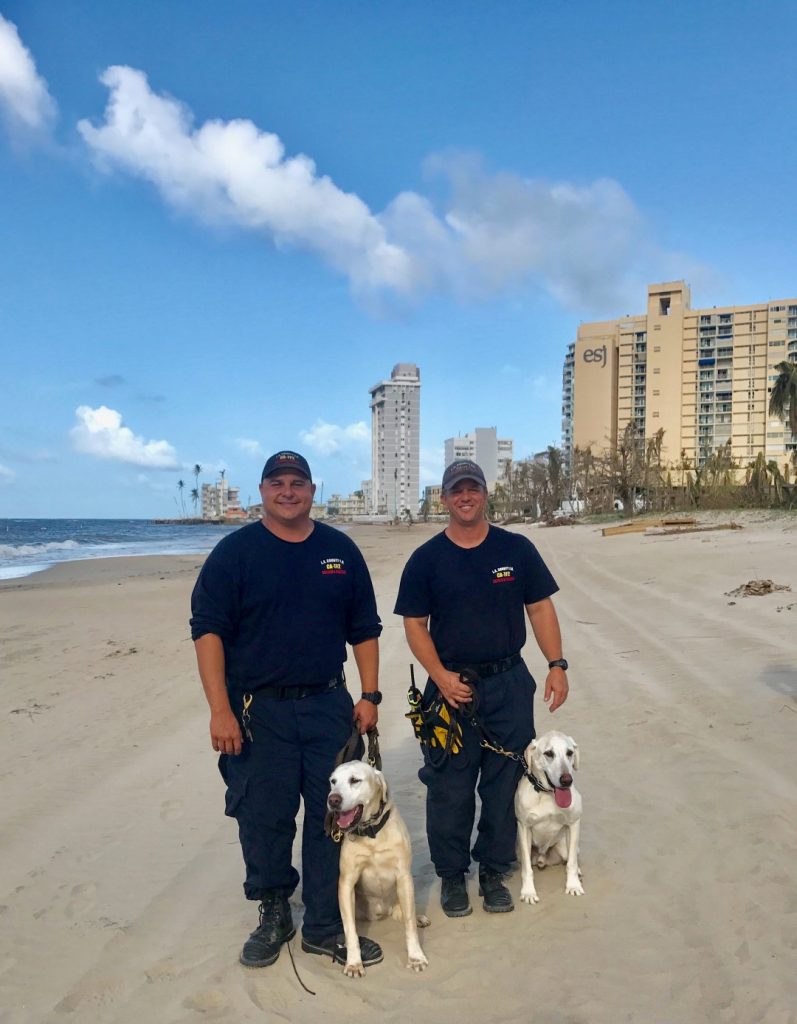 Then on September 20, 2017, deadly Hurricane Maria struck the Caribbean. Five SDF-trained teams from California and Virginia deployed to Puerto Rico and help for survivors after the island was devastated by 70 mph winds. They remained there five days before returning home to recuperate.

Ripley and Jason achieved FEMA Re-Certification on November 11, 2017, as all teams must do every three years. It ensures that America’s search teams are up to the high standards required to do the job out in the field.

The team continued to train with their task force teammates however, as the years passed, Ripley began to slow significantly as he began to suffer from arthritis. He always remained a passionate chew toy fan and the Vasquez family enjoyed Ripley’s sense of humor.

Sadly, Jason had to say goodbye to his partner on November 7, 2020. He was able to thank him for his service and friendship on behalf of a grateful nation. Ripley will be remembered fondly by all who knew him and honored at SDF’S Canine Memorial Wall in Santa Paula for many years to come.